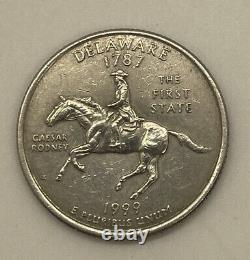 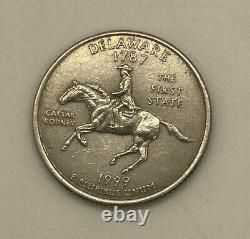 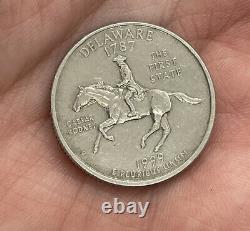 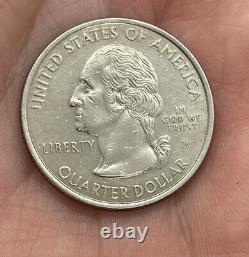 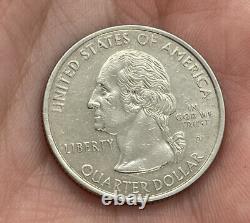 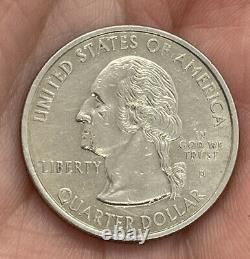 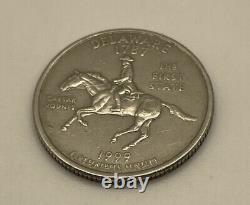 The 1999 Delaware quarter, released on January 1, was the first issue in the 50 States Quarters series and honors the first state to ratify the United States Constitution. Delaware became the first state on December 7, 1787, when all 30 delegates of the Delaware Constitutional Convention ratified the U. 11 years earlier, key votes on the call for independence were deadlocked; Caesar Rodney, who served in the Continental Congress, received word about the impasse while he was in Dover, Delaware. Determined to break the gridlock, Rodney jumped on his horse and galloped north 70 miles to Philadelphia on July 2, just as the voting process went underway for the Declaration of Independence, which Rodney signed on August 2.

Caesar Rodney is seen riding his horse on the reverse of the 1999 Delaware quarter. The design captures the nighttime ride Rodney made during a thunderstorm from Dover to Philadelphia to cast a deciding vote for independence. DELAWARE and the date of the coin, 1999, are seen above Rodney; above the trailing tail of the galloping horse are the words THE FIRST STATE, which serves as Delawares proud nickname. To the left of the horse is the inscription CAESAR RODNEY. Below is the initials of engraver William Cousins.

The seller is "jennsilv-0" and is located in Salem, Oregon. This item can be shipped worldwide.
setscompletepr70proofslabel1999-2008danscoquarterscoincoinsstatesilverpf70cameowashingtonunitedrollproofstatehoodmint1999-2009pcgsdeepdelawarequarterultrarare1999-sflagstateslibertyboxesdcamcollectionpr70dcam