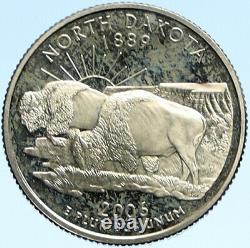 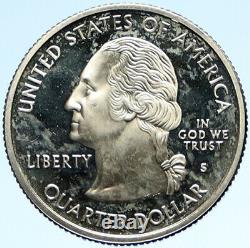 Item: i99306 Authentic Coin of. United States George Washington - North Dakota State Quarter 2006 S Proof Silver Quarter (25 Cents) 24mm (6.32 grams) 0.900 Silver 0.1808 oz. ASW Reference: KM# 385a UNITED STATES OF AMERICA IN GOD WE TRUST LIBERTY S QUARTER DOLLAR, George Washington facing left. NORTH DAKOTA 1889 DW 2006 E PLURIBUS UNUM, A pair of grazing American Buffalo in the foreground with a sunset view of the rugged buttes and canyons of the state's "Badlands" in the background. He presided over the convention that drafted the United States Constitution, which replaced the Articles of Confederation and remains the supreme law of the land.

He oversaw the creation of a strong, well-financed national government that maintained neutrality in the wars raging in Europe, suppressed rebellion, and won acceptance among Americans of all types. Washington established many forms in government still used today, such as the cabinet system and inaugural address.

His retirement after two terms and the peaceful transition from his presidency to that of John Adams established a tradition that continued up until Franklin D. Roosevelt was elected to a third term.

Washington has been widely hailed as "father of his country" even during his lifetime. Washington was born into the provincial gentry of Colonial Virginia ; his wealthy planter family owned tobacco plantations and slaves, that he inherited. Although Washington owned hundreds of slaves throughout his lifetime, his views on slavery evolved, and he desired to free them and abolish slavery. After both his father and older brother died when he was young, Washington became personally and professionally attached to the powerful William Fairfax, who promoted his career as a surveyor and soldier. Washington quickly became a senior officer in the colonial forces during the first stages of the French and Indian War. Chosen by the Second Continental Congress in 1775 to be commander-in-chief of the Continental Army in the American Revolution, Washington managed to force the British out of Boston in 1776, but was defeated and almost captured later that year when he lost New York City. After crossing the Delaware River in the dead of winter, he defeated the British in two battles, retook New Jersey and restored momentum to the Patriot cause. Because of his strategy, Revolutionary forces captured two major British armies at Saratoga in 1777 and Yorktown in 1781.

Historians laud Washington for his selection and supervision of his generals, encouragement of morale and ability to hold together the army, coordination with the state governors and state militia units, relations with Congress and attention to supplies, logistics, and training. In battle, however, Washington was repeatedly outmaneuvered by British generals with larger armies. After victory had been finalized in 1783, Washington resigned as Commander-in-chief rather than seize power, proving his opposition to dictatorship and his commitment to American republicanism. Dissatisfied with the Continental Congress, in 1787 Washington presided over the Constitutional Convention that devised a new federal government for the United States. Elected unanimously as the first President of the United States in 1789, he attempted to bring rival factions together to unify the nation.

Washington proclaimed the United States neutral in the wars raging in Europe after 1793. He avoided war with Great Britain and guaranteed a decade of peace and profitable trade by securing the Jay Treaty in 1795, despite intense opposition from the Jeffersonians.

Although he never officially joined the Federalist Party, he supported its programs. Washington's Farewell Address was an influential primer on republican virtue and a warning against partisanship, sectionalism, and involvement in foreign wars. He freed all his slaves by his final will. Washington had a vision of a great and powerful nation that would be built on republican lines using federal power. He sought to use the national government to preserve liberty, improve infrastructure, open the western lands, promote commerce, found a permanent capital, reduce regional tensions and promote a spirit of American nationalism.

At his death, Washington was eulogized as "first in war, first in peace, and first in the hearts of his countrymen" by Henry Lee. The Federalists made him the symbol of their party but for many years, the Jeffersonians continued to distrust his influence and delayed building the Washington Monument. As the leader of the first successful revolution against a colonial empire in world history, Washington became an international icon for liberation and nationalism.

With a population of over 327 million people, the U. Is the third most populous country. The capital is Washington, D. And the largest city by population is New York City. Forty-eight states and the capital's federal district are contiguous in North America between Canada and Mexico.

Territories are scattered about the Pacific Ocean and the Caribbean Sea, stretching across nine official time zones. The extremely diverse geography, climate, and wildlife of the United States make it one of the world's 17 megadiverse countries.

Paleo-Indians migrated from Siberia to the North American mainland at least 12,000 years ago. European colonization began in the 16th century. The United States emerged from the thirteen British colonies established along the East Coast. Numerous disputes between Great Britain and the colonies following the French and Indian War led to the American Revolution, which began in 1775, and the subsequent Declaration of Independence in 1776.

The war ended in 1783 with the United States becoming the first country to gain independence from a European power. The current constitution was adopted in 1788, with the first ten amendments, collectively named the Bill of Rights, being ratified in 1791 to guarantee many fundamental civil liberties. The United States embarked on a vigorous expansion across North America throughout the 19th century, acquiring new territories, displacing Native American tribes, and gradually admitting new states until it spanned the continent by 1848. During the second half of the 19th century, the Civil War led to the abolition of slavery. By the end of the century, the United States had extended into the Pacific Ocean, and its economy, driven in large part by the Industrial Revolution, began to soar.

The Spanish-American War and World War I confirmed the country's status as a global military power. The United States emerged from World War II as a global superpower, the first country to develop nuclear weapons, the only country to use them in warfare, and a permanent member of the United Nations Security Council. The Rights Acts of 1964, 1965 and 1968 outlaws discrimination based on race or color. During the Cold War, the United States and the Soviet Union competed in the Space Race, culminating with the 1969 U. The end of the Cold War and the collapse of the Soviet Union in 1991 left the United States as the world's sole superpower. The United States is the world's oldest surviving federation. It is a federal republic and a representative democracy.

Economy is largely post-industrial, characterized by the dominance of services and knowledge-based activities, although the manufacturing sector remains the second-largest in the world. The United States is the world's largest importer and the second largest exporter of goods, by value. Although its population is only 4.3% of the world total, the U. Holds 31% of the total wealth in the world, the largest share of global wealth concentrated in a single country. Despite wide income and wealth disparities, the United States continues to rank very high in measures of socioeconomic performance, including average wage, human development, per capita GDP, and worker productivity. The United States is the foremost military power in the world, making up a third of global military spending, and is a leading political, cultural, and scientific force internationally. World-renowned expert numismatist, enthusiast, author and dealer in authentic ancient Greek, ancient Roman, ancient Byzantine, world coins & more. Ilya Zlobin is an independent individual who has a passion for coin collecting, research and understanding the importance of the historical context and significance all coins and objects represent. Send me a message about this and I can update your invoice should you want this method. Getting your order to you, quickly and securely is a top priority and is taken seriously here. Great care is taken in packaging and mailing every item securely and quickly. What is a certificate of authenticity and what guarantees do you give that the item is authentic? You will be very happy with what you get with the COA; a professional presentation of the coin, with all of the relevant information and a picture of the coin you saw in the listing.

Additionally, the coin is inside it's own protective coin flip (holder), with a 2x2 inch description of the coin matching the individual number on the COA. Whether your goal is to collect or give the item as a gift, coins presented like this could be more prized and valued higher than items that were not given such care and attention to. When should I leave feedback?

Please don't leave any negative feedbacks, as it happens sometimes that people rush to leave feedback before letting sufficient time for their order to arrive. The matter of fact is that any issues can be resolved, as reputation is most important to me. My goal is to provide superior products and quality of service. How and where do I learn more about collecting ancient coins? Visit the Guide on How to Use My Store. For on an overview about using my store, with additional information and links to all other parts of my store which may include educational information on topics you are looking for. This item is in the category "Coins & Paper Money\Coins: US\Quarters\State Quarters (1999-2008)". The seller is "highrating_lowprice" and is located in this country: US. This item can be shipped worldwide.