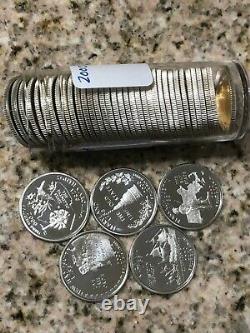 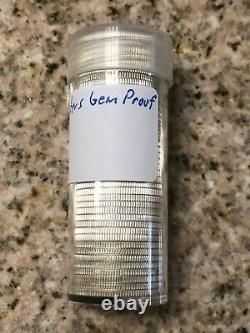 2000 S SILVER QUARTER ASSORTED ROLL (40 ASSORTED SILVER QUARTERS FROM ALL 5 STATES) GEM PROOF QUARTERS FROM MINT SETS FROM THE 50 STATES SERIES. Grading is subjective so please look at the pictures and judge for yourself. Even though these coins come from the U S Mint, they are uncirculated gem proof and not always perfect.

Some may have white spots or natural toning. The US Mint ceased production of 90% silver coins in 1964. Starting in 1992, the mint resumed minting 90% silver dimes, quarters and half dollars exclusively for their annual Silver Proof Sets. These coins are produced to the exact weight and specifications as were 1964 and before 90% silver coins. All of these proof coins bear the "S" San Francisco mintmark.

They were not individually inspected to cull for cameos, deep cameos, variations, toned coins, spots or mint errors. There is 7.2339 troy ounces of silver in 40 Silver Washington Quarters. This item is in the category "Coins & Paper Money\Coins: US\Quarters\State Quarters (1999-2008)". The seller is "artandcoinman" and is located in this country: US.